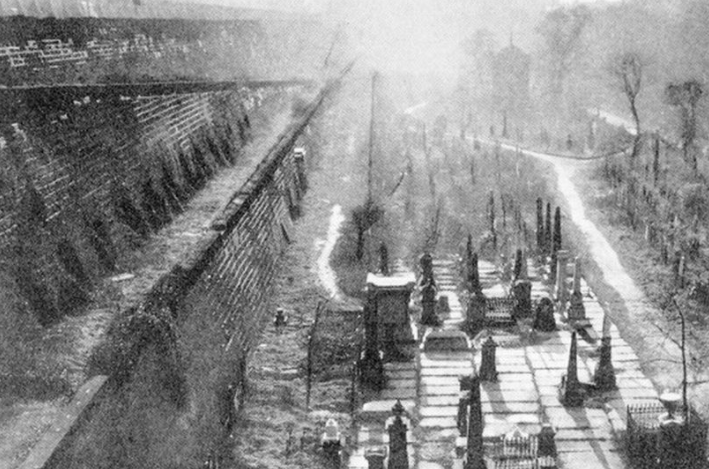 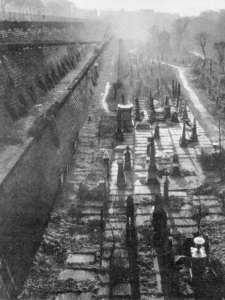 In 1857, the Northern Daily Times carried a story about complaints received to the public health board in Liverpool about a strange ‘fog’ and smell believed to be emanating from a large burial pit in St. James’ cemetery opposite Gambier Terrace in what is now known as the Georgian Quarter. 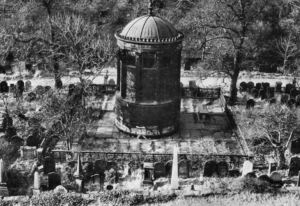 Watchmaker and local resident Mr. Ralph Hess was reported to have told a public meeting: “In passing early in the morning I have noticed a vapour arising from the cemetery.

“The smell is unmistakably that arising from a graveyard. It is most felt when the wind is in a certain direction.”

Another local resident, Mr Isham HE Gill, a partner in a Liverpool law firm who also lived close by, said: “I have often observed a species of fog or mist hanging over the cemetery.” 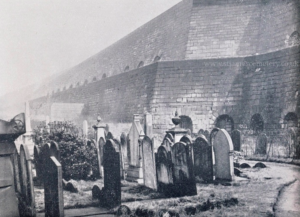 He further complained that the “pit was certainly injuring the neighbourhood. In 1835 a home in Gambier Terrace let for £200 a year, they are now let between £80-100” attributing the collapse in property values to the smell emanating from an open mass grave at the cemetery.

The sad reality was that the open pits housed thousands of the city’s dead, many succumbing to the epidemics that raged through the city at regular intervals as it continued to grow apace through the 19th century. 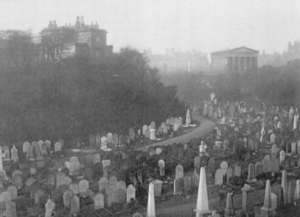 A later report in the same paper noted some statistics presented at a follow up meeting about the stench. Some 24,000 interments were said to have occurred between 1828 and 1857 at the cemetery, among them nearly 15,000 involving over 500 mass graves holding approximately 30 bodies each.

Once at capacity, the pits would be filled with quicklime and buried over, the tragic last resting place for thousands of the city’s poor residents who could not afford their own private graves or the grandeur of the mausoleums and monuments found elsewhere in the cemetery. 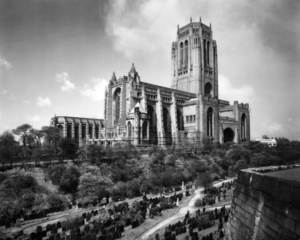 It also offers a snapshot of the grim realities of the stark inequalities which existed in the city as it grew apace during its massive expansion in the 19th century.

The concern among the local residents at the meeting was focused on the offensive smell and detrimental effects on property values, not the sad loss of life occurring at such scale during that period.

In this respect the saga also tells a tale of two cities. On the one hand, the well-heeled emerging middle classes residing in the newly created wealthy neighbourhood around Gambier Terrace, and on the other the many precarious lives lived in hardship and poverty, ending without dignity, tossed body on top of body in open pits while nearby residents held their noses in disgust.

The reports also provide a glimpse into how the city was struggling to deal with the loss of life brought about by the many ongoing public health crises it faced, as epidemics ravaged through the cramped and unhygienic poorer neighbourhoods and spilled out into the more wealthy parts of the city.

These days St. James’ cemetery, which is located opposite Gambier Terrace on Hope Street, is a public park in the grounds of the Anglican Cathedral. 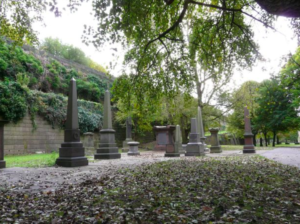 Many of the gravestones and mausoleums to Liverpool’s long dead still remain, lining the pathways and dotted about its atmospheric and unique surroundings.

For those with money, power and influence, grand structures tell of their lives and their legacy.

For those without, not even a gravestone is there to mark their passing. 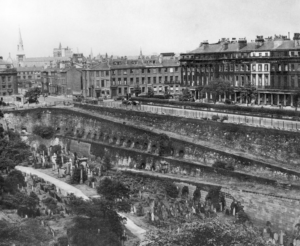 Gambier Terrace and the ramps down to St James.  This could possibly have been taken during the Second World War, and shows the cemetery starting to be ‘overgrown’